When we signed on to give birth at SFBC, we knew we would be one of the first births there. But we didn’t think we would be the very first. Five years later, it is still one of those magical life occurrences that we couldn’t possibly have planned but still feels like some kind of achievement. Number One! Even the birth itself felt like a group victory: a marathon five hours of pushing surrounded by a full team generating unceasing encouragement. That team consisted of my partner, my friend who served as doula when our doula was at another birth, our doula who finally made it in time for all that pushing, and not one, not two, but three midwives. And a yarn vulva called Knit The Clit. The experience sparked a love and appreciation of the birth center and midwives in general that hasn’t dwindled since. Three years later we had our second child in the tub in that very same room. And just last week, we took this photo of our two kids bathing together in a tub that happens to belong to another midwife. We feel so grateful to have had two healthy, empowering, affirming births at SFBC. Both my partner and I feel that we were able to be present for the birth of our children in a way that launched us into positive parenthood. At five years, I think we can officially say that SFBC is an institution, and we will continue to support that institution so that more and more people can access the kind of incredible, collaborative care that SFBC offers. 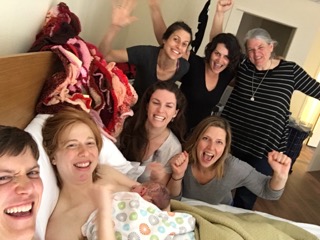 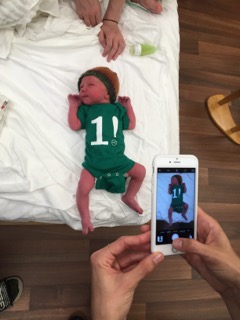 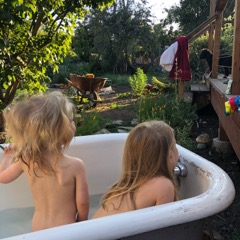