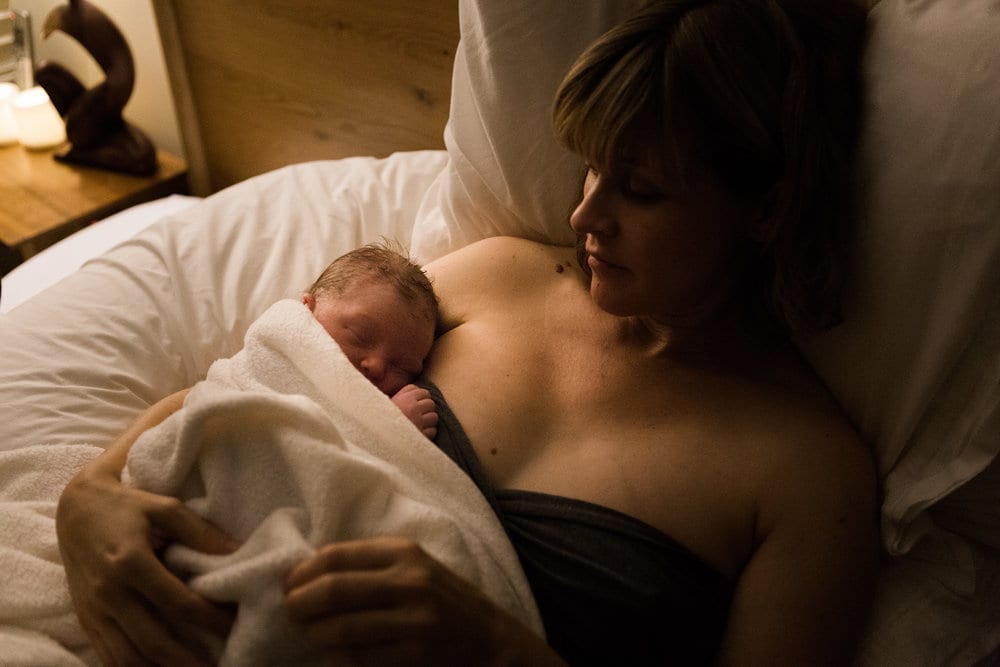 When I became pregnant with my third child, River, I was over the moon.  I had just turned 40 and was hoping to have a third baby before it was too late.  When I found out I would be the mother of three boys, I was at first apprehensive, but then I decided it must be a sign that the universe had a special plan for me!  I didn’t have an OBGYN provider in San Francisco, but I had heard positive things about UCSF’s approach to childbirth, so that’s where I started my prenatal care.  At 35 weeks I transferred my care to the freestanding San Francisco Birth Center, because I wanted a more intimate and homey birth experience without actually having to give birth in my own home, in the presence of my two older children.

Birth is such a profound and intimate experience, and I wanted my child’s birth to be attended by someone I knew and I had a relationship with.  San Francisco Birth Center offered all of the well-visit medical checks you would expect from a doctor’s office with a much more comfortable, homey environment and more personalized care.  There was ample time for questions and chit-chat in my visits, unlike my experiences at UCSF, where I felt rushed.  For a low-risk pregnancy, a stand alone birth center like this is totally the way to go.

River was born at 38 weeks on a beautiful, warm, pre-fall day of September 10, 2017. The timing was perfect as I had wanted to make it to at least 38 weeks in order to get the two older children started in school, but I didn’t want to have to wait all the way until my due date, when Peter had a conference.  I felt ready to burst, and had started having contractions at 34 weeks, so I was beyond ready for his arrival by 38 weeks.

I had signed up for a prenatal partner massage class at Yogatree about a month before my due date, and attended this massage class with baby-daddy Peter the day before I went into labor.  Although it wasn’t my intention to induce labor by taking the class, I’m convinced that all of the massage with my partner helped to put me into labor.  Massage turns out to be a fun natural induction technique that I would recommend to every expectant mother!  I remember that the teacher had talked in the class about how massage increases oxytocin levels, so of course, it makes sense physiologically – oxytocin is what starts the birth process.

The next morning, I awoke to contractions.  Although the contractions felt exactly the same as the previous ones I had had for weeks, I had never had them first thing in the morning before.  I tried to read a book to River’s big brother Fehren (who was 4 years old) and found I couldn’t concentrate on the words because of the strength of the contractions.  At that moment, I realized this was the real deal and it was time to go in to the birth center.

When my husband found out what was going on, his first thought was the date.  It was September 10th and he did not want us to have the baby on September 11th, for obvious reasons.  Since labor seemed to be starting but birth didn’t seem imminent he was worried.  He kept saying “we can’t have this baby tomorrow – you’ve got to have him today”.

When we arrived at the Birth Center Midwife Julie did an internal exam and found that I was 2 centimeters dilated.  That’s not considered active labor, and normally midwives would not want you to arrive this early – especially for a first birth.  However, I was sure I was going to have this baby today.  My previous labors with big brothers Petey and Fehren had both had a fairly long “warm-up” period of latent labor, followed by very quick active labors of 4-10 centimeters dilation in a matter of minutes.  If I could graph the progression of the labors on a graphing calculator they would probably look like an exponential curve; with a slow, gradual buildup and then rapid ascent at the end.

So the midwife stripped my membranes and then recommended I go for a walk to try to kick things into gear, and my partner agreed.  He was determined that we beat the clock, and have this baby on September 10th rather than September 11th.  First we paced around the hallways inside a bit and then went to walk around the neighborhood.  We were outside for maybe 15 minutes when the contractions got to be so strong that I had to hang on to parking meters to cope with them.  At that point, it seemed like time to return to the birthing center.

When I returned, Julie checked me again and reported that I was 4 centimeters dilated.  I started using the nitrous oxide tube, which I found helpful for relaxation, and my doula and midwife started a warm bath for me.  Between the bath, the birth ball and the nitrous oxide, I was able to cope pretty well for awhile, but there came a point at which I hit a wall and found my energy draining.  I started fantasizing that I could transfer to a hospital and get an epidural.  I recognized from my past births that the moment I start thinking about epidurals (and losing confidence that I could get through it without one) is usually right about at the end of process for me.  When I started asking about epidurals my husband and midwife reminded me that there was no time to get in a car, and go somewhere else to have an epidural.  Julie asked me if I wanted her to break the bag of waters.  I agreed, knowing this would speed up labor and hopefully get the whole thing over with more quickly.  I knew I couldn’t last for hours with contractions of that intensity.

She broke the bag, I felt the water gush out, and immediately the contractions intensified.  The only thing that I could really do to cope with them at that point was to scream.  I remembered from childbirth class and my trusty Ina May books that you’re not supposed to scream and make high pitched stress noises, and instead to “bring it low” and do more relaxed moans, but my body just could not follow those instructions.  I had no control.  To me it felt like the experience of going over the giant first drop at the beginning of a roller coaster – my mouth just screamed instinctively.  Midwife Julie asked me if I was feeling a pushing sensation, and I thought to myself  “Oh okay, maybe that’s what that is – maybe that explains the screaming…”  So the next contraction I got into a kneeling position, and tried pushing, and sure enough I felt my son start to come down through the birth canal.  It was an intense sensation (which prompted more screaming), but it was such a relief knowing that he was coming out and I would finally be able to meet him.

I really lost track of time and don’t remember how long I pushed to get River out.  I think it was just a few pushes over the course of just a few minutes.   All I know is that we originally arrived at the San Francisco Birth Center around 4pm and River was born at 10:21 at night.

With a big push, I felt River’s head come out, which was an amazing sensation, followed by his slippery little body.  He was so covered with vernix!  I have never seen such a vernixy baby before.  He looked a little blue when he came out, so I was instantly concerned about him.  The maternal anxiety kicked in immediately!

I was immediately anxious over his well being.  Was he pink enough?  How was his breathing?  Was his circulation okay?   What was his apgar score?  I put him to my breast and he started suckling immediately, which was a relief.  However, over the course of the next several hours, various extremities and parts of his little body kept turning blue, so at Julie’s recommendation, we ended up taking him to the NICU at UCSF, just to make sure he was okay.  All of his vitals looked fine, but I think she could tell that we just needed some peace-of-mind around the “turning blue” thing, which was unusual.

UCSF, being the master of fancy medical testing, hooked my baby up to a whole bunch of wires that would constantly measure his blood oxygen level, his heart rate, his breathing, etc.  Turns out all was fine and we eventually were sent home and were able to get some rest.  Apparently blue limbs are something that can happen with slightly early babies – their circulatory systems can be immature and can take a little while to regulate.  By two weeks postpartum (around the time of his due date), the “turning blue” thing had totally stopped and River was doing just fine.

All in all, my birth experience at the San Francisco Birth Center was beautiful.  It was comfortable, relaxed (except for those brief screaming episodes), and the expert support of the midwives gave me the confidence I needed to do what the human body is perfectly designed to do – birth a baby. I was ultimately so happy with my decision to transfer to the SF BirtH Center at 35 weeks, and I wish it had occurred to me to transfer there earlier when I could taken better advantage of their wonderful prenatal care.  Midwife-run birth centers offer such a valuable resource to a community for low-risk pregnancy and birth.  I can’t say enough positive things about the San Francisco Birth Center.  I wish this type of care was more widely available to mothers everywhere.