Before meeting Josephine, I knew she was going to be great. She had given me a very easy ride during the pregnancy, with no complaints besides a little fatigue first trimester.  The hardest part for me was the anticipation of the unknown: what labor would be like, how our lives would change and if she would be ‘ok’. In the last three weeks of pregnancy, it was discoverd I had low blood platelet count and increasingly high blood pressure.  Platelets help blood to clot and the worry would be if there was tearing for me or if the baby was also born with low platelets. We went to a maternal fetal medicine doctor, who wasn’t much help in figuring out if the low platelets were gestational or not. We wouldn’t know how the baby was impacted until after the birth. The one thing the doctor did help with was upping the anxiety of the last few weeks of an uneventful pregnancy as she said she would induce me right away as I likely was developing preeclampsia (not related to the platelet count).  At 39 weeks and one day my blood pressure was 142/93, for the second day in a row, and my platelet count was in the 70s.  After discussing with Nancy (who had discussed this with OBs and a professor at UCSF), one of the midwives at the birth center, and Amanda, a midwife assistant, it was decided the safest way to deliver the baby was through induction at the hospital. I was no longer anxious as we had decided on a plan and I was now determined to meet my baby.

I called my husband, Chris, right away after this appointment as we would be going to St Luke’s hospital that night for induction.  I wanted to make sure he got home early so we could enjoy some last few hours together and pack for the hospital. Chris received this call half an hour before he got to tell the City of Palo Alto that he was resigning, going to the hospital for the baby now and would not be back as he would be starting his new job with the city of SF after spending time with the baby.  The timing of this was unfortunate, but also perfect. We were warned induction could take up to three days.  Admission at St Luke’s happened at 8pm on 4/11, with Nancy and Amanda in attendance, which was so helpful and comforting. They talked through what the medications would do that the nurses and midwives threw at me and likely what the best option was: misoprostil (cervical ripener) and an ambien, followed by Pitocin in the morning. The IV for antibiotics (and blood transfusion, if needed due to low platelets) was placed in my left arm after a painful failed attempt in the right.  Having Nancy handle my care in the last few weeks was one of the reasons I remained sane and confident in my birth. Her straightforward, caring and experienced style instilled trust and a partnership that is so needed when you are preparing for the major life experience of birth.

An hour after the miso my water broke around midnight and I spent the rest of the night in the hospital bed hooked up the the fetal monitoring system trying to get some rest for the next day and what I was expecting to be one of the most physically exhausting days of my life.  Around 5am contractions started happening that I could feel and not just see on the monitoring system. We ate breakfast and Chris was my amazing nurse and birth partner in a 5’x7′ room, as we waited to get into active labor so we could switch rooms.  We walked the halls and I held on to things in the hall and breathed big and deep during each contraction.  Chris took every step with me, which was so analogous for the pregnancy and what I would soon know him to be as a father. For some reason all I wanted to hear was Nick Drake’s ‘Pink Moon’ album and that was played quite a bit (and stuck in my head for days). The contractions were not what I thought they would be; they felt lower in the abdomen and more manageable than I anticipated.

By noon I was examined by the St Luke’s midwife, Hannah, and I was 6cm and they believed no Pitocin would be needed. This was such a relief for me as I was afraid of the sensation a Pitocin labor would bring and was not mentally prepared for this. The nurse was constantly around fixing my fetal monitor as it would not pick up the baby’s heart rate when I would move too much or squat. This was annoying, especially in active labor when she would push them against my belly during a contraction. The other distracting element were the antibiotics (penicillin) for GBS every 4 hours, which was almost as painful as the contractions.

Around 1pm we were moved to a labor and delivery room and Amanda arrived, and shortly after was Sara (another midwife from the birth center), which was a great relief to see friendly helpful faces instead a brand new nurse. Once active labor started, things seemed liked they moved so fast, a blur, but I felt so present, even if it seemed I was very inward at the time. As the contractions came on I focused on my cleansing breath at the start and end as well as matching my breath with the intensity of the contractions, like I had been told in listening to so many hours of hypnobirthing with Rachel yellin. As people moved in and out of the room, took pictures brought in flowers, pressed fetal monitors against my belly and gave me water, recharge and broth, I was aware of this but could not communicate with them as I usually would. It really did feel like my brain was in another state.

There were one to two contractions that brought me automatically down into a squat position and I felt my abs contract and my body start automatically pushing…almost like the feeling when you vomit from food poisoning! When this happened the second time I let Sara know and she said to trust my body and they moved me onto the bed. The St Luke’s midwife, Hannah, was in the room and sitting on the end of my bed coaching me, along with Amanda and Sara. It was like a midwife chorus that kept telling me to get one more push in or to push harder, with sara and Amanda holding my legs up for me or putting cool cloths on my forehead. After an hour of pushing I could feel the head and was so surprised at how that made me feel, I wanted to get the job done! There were more contractions with rounds of pushing and I remember thinking that this has got to be over soon, as I was getting tired at the end of each push. When I noticed the midwives look excited and look at Chris, I knew I was close and found some extra energy.  I could feel the head come through and on the next push the shoulders and the body came out fast but it also felt long and it was the biggest relief. The baby was placed on my chest as the placenta was delivered without my noticing. The baby stared at me, stunned with mouth open and eyes wide. I couldn’t believe this was my baby, but it also felt so right.  I couldn’t get a good view of the full body so I couldn’t tell the sex, but I didn’t care because everything seemed so perfect.  Chris told me it was a girl. All of a sudden it was as if only her and I existed in the room. I thought I would cry, but I was just filled with so much joy, I could only stare in amazement. It felt like they cut her cord right away and I could feel the blood spill down my belly. They quickly took her away, since she wasn’t crying and warmed and suctioned her. Then they brought her back and we hung out for about an hour. This is when they allowed Chris to cut the rest of the cord and I could watch. While I was holding the baby they gave me some numbing medication and stitched a small tear in my labia, but everything else was in tact. I was so relieved. I’ve never seen Chris more excited and happy about the birth of our child and I couldn’t have gotten through the labor without all of his help and support. He was the embodiment of a proud father; all smiles. I remember saying to the midwives that the birth wasn’t as bad as I thought it would be and it felt very manageable.  This made them laugh and they said they would remember I said that. Chris and I continued to relive every detail of the labor and birth for the next week, as there was so much to recall and describe from both of our viewpoints. It is a day I will never forget and will always feel happy when I recall the events that brought our beautiful strong daughter into the world.  One thing Chris said, I will never forget and makes my heart melt every time I think about it: ‘It’s like they took my favorite person and wrapped her up in to a tiny perfect baby!’

Even though we were at the hospital, the birth felt as natural as it could be and I was so glad Sara and Amanda were there to be the guides for Chris and I during the birth and Nancy prior to the birth.  I will always wonder how my birth would have differed at the care of Amanda and sara, as there were times during the labor I could tell they were holding back since we were in the hospital setting.

Now that I am on the other side I know that my labor experience was manageable and taking care of the baby is just fine too! Breastfeeding is a different ball game! I thought that was the easy part, but for me it has been painful and we are working towards better latches.  I can’t wait to share life with this girl and get to know her. 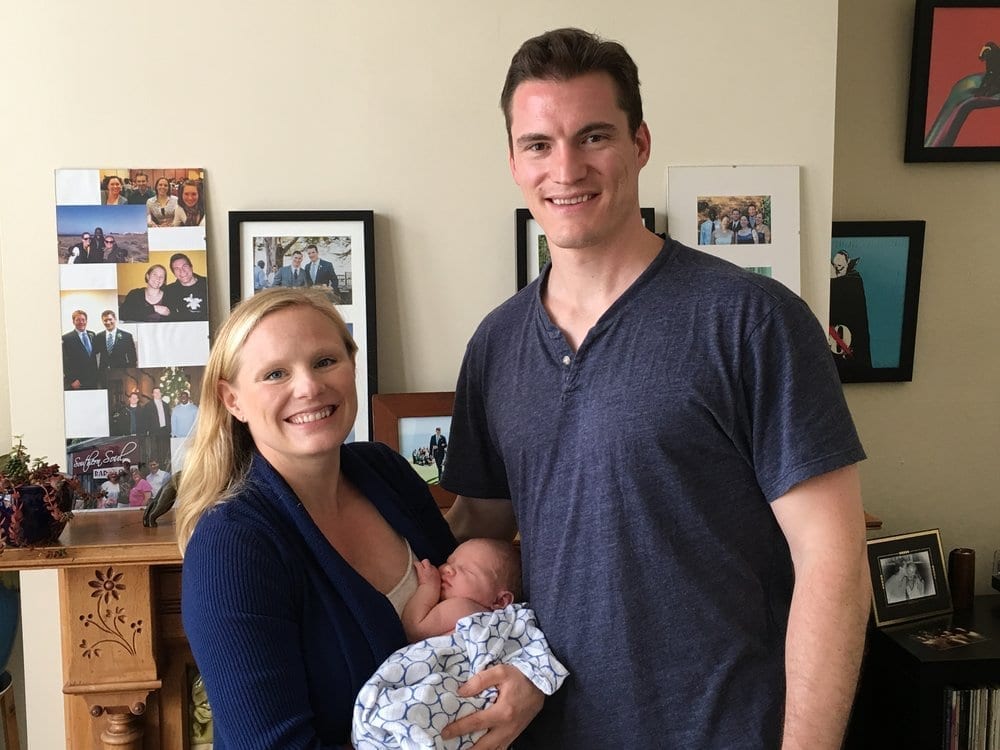