I was not the best pregnant person. Frankly, I was miserable most of the time, swollen, achy, and I wasn’t getting much sleep, but I persisted in “doing all the things” so that I could take care of myself and the little being growing within. I meditated and listened to hypnobirthing rehearsals to help me get ready for labor and to distract me from the discomfort I was feeling in those last months. Part of my preparation had been to tell myself that labor was going to be a marathon—a painful journey of many days before we arrived at the actual birthing part and that more than likely I would be delivering after my due date. 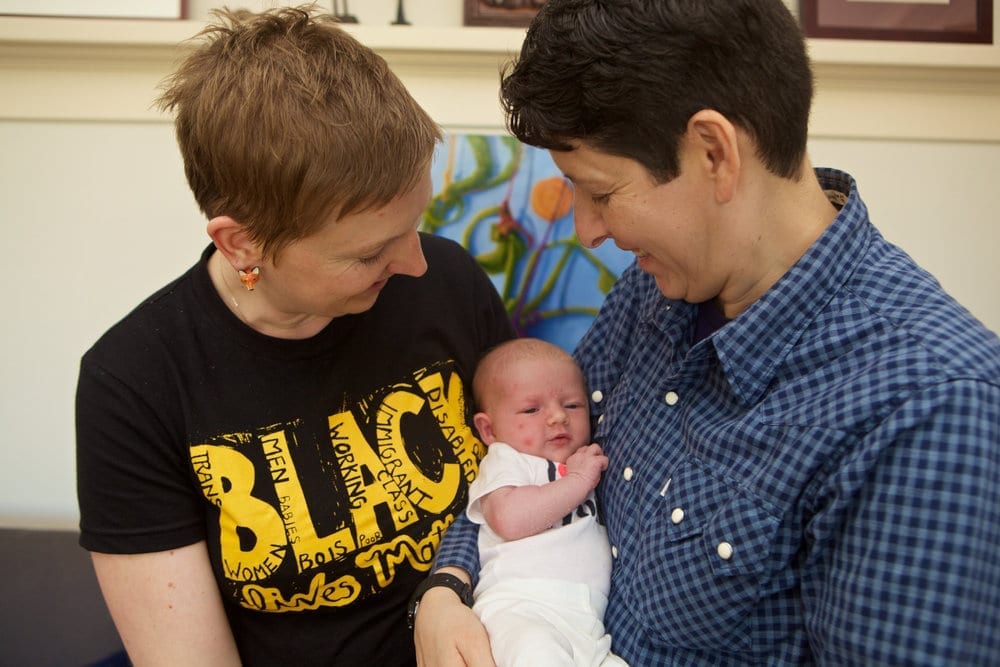 So, it was surprising and a little unnerving when a week before my due date I woke up to soaking pjs. I thought that my water had broken and I was anxious I’d be put on a 24-hour clock. I called the birth center and Julie examined me and determined that it was actually just my mucous plug liquefying. Relieved, I believed I had a lot of time left before I’d actually go into labor. However, my mom, an ex-labor and delivery nurse who would be attending the birth as our doula, was supposed to come in on Tuesday. Before hearing the prognosis from Julie she changed her ticket to arrive that night. Thank goodness she did!

The next morning I awoke to the same wetness and 30 minutes later had a bloody pad. My wife, Violeta, wasn’t sure if she should stay home from work or not, but I urged her to go saying, “It could be another week still!” I started feeling some cramping, but again, thought that this could last for a long time, so I ignored it, dropped the car off at the shop for an oil change and walked the mile and a half home. Two hours later, the cramping had worsened, but was still bearable enough that I walked back to the shop to get the car and went to pick my mom up from the apartment where she was staying. We headed to Trader Joe’s to get her groceries and that’s where I began to feel the contractions begin with a bit more regularity. Still, convinced that this early labor could last days I ignored it, despite being unable to talk during the peak of each short contraction.

By the time we got home, I knew that things were probably getting going. I used the labor mantra I had practiced in meditation to help me through each contraction—“inhale expand, exhale unfold.” As the day wore on the contractions grew closer together and stronger. I spent a lot of time on hands and knees on the floor by my bed, in the shower, and squatting on the toilet. Sometimes my mom applied counter pressure, sometimes I vocalized in a low hum. It was painful, but manageable and in my mind this process was going to last a long, long time.

At 3:30 my mom suggested that we go to the birth center, but I insisted I wasn’t “4-1-1,” so we stayed home. By 4:30, however, my mom said it was time to go and I somewhat aimlessly wandered around the apartment trying to pack a bag amidst the intense contractions.

We arrived at the birth center around 5:30 and Violeta was already there. I immediately wanted to get into the tub, but Sara checked me first. When she announced that I was 10 centimeters dilated I cried in disbelief and relief! In my mind, this was the hardest part and now I just pushed a baby out. That turned out to not quite be the case.

I labored in the tub for about 2 hours and it really slowed everything down. It also gave me some much-needed rest, but by the end, Sara was encouraging me to get out and try some other positions so I could bring the baby down.

Many people describe pushing as a great relief. For me, it felt like the most intense, searing, burning pain I’ve ever felt. Laboring felt easy and manageable compared to pushing. But, Sara, Kara, Violeta, and my mom were all incredibly encouraging and rooted me on as each contraction arose giving me power to push. I grunted and screamed and wailed and moaned through each push. My legs shook from being in a side-lying position for so long. I complained that I didn’t want to do this any more.

After two and half hours of trying to push, I finally figured out what my body truly needed to do. The only way out of this pain was through. Throughout all of my complaints, the team was so great and I was encouraged to feel the top of Luna’s head. A few more excruciatingly painful pushes later I birthed Luna’s head and one push after that came her body. Sara immediately put her on my chest and Violeta and I snuggled her close, crying tears of joy, disbelief, and amazement.

Shortly after I birthed the placenta, despite my great fear that it would hurt as much as the head. It didn’t. “It’s like a jellyfish,” Kara said and it was, it just slipped right out.

I held Luna while Sara attended to me and we all snuggled skin-to-skin on the bed. Eventually, Violeta cut the cord then and I went to take a short shower. When I returned to the clean bed, Luna was latched to Violeta! Shortly after she latched to me and we nursed for the first time. After a short rest, we headed home to our own bed and watched Luna’s first sunrise. 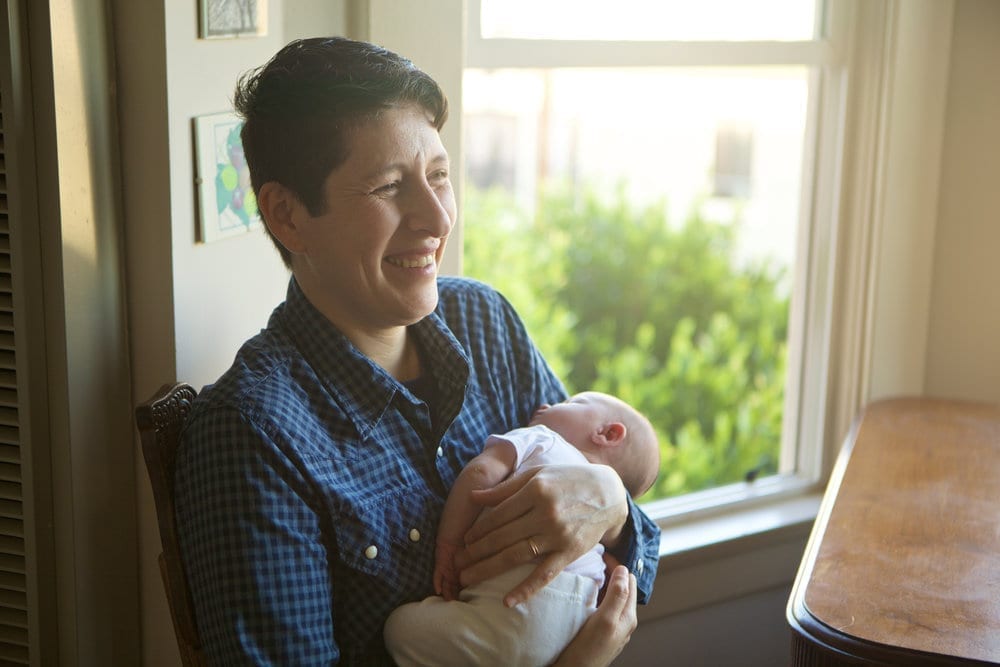 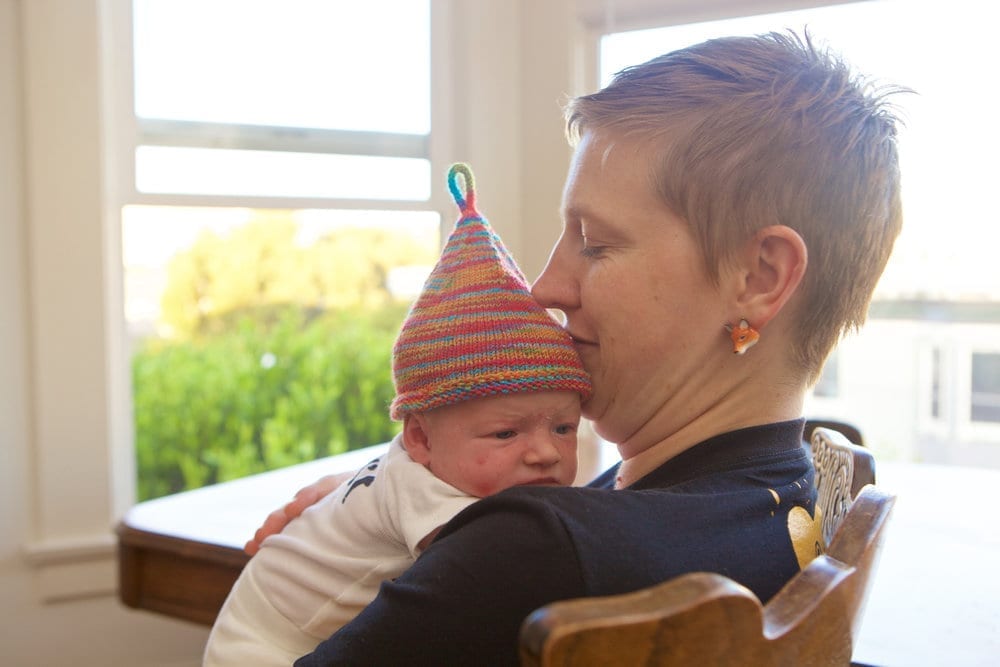 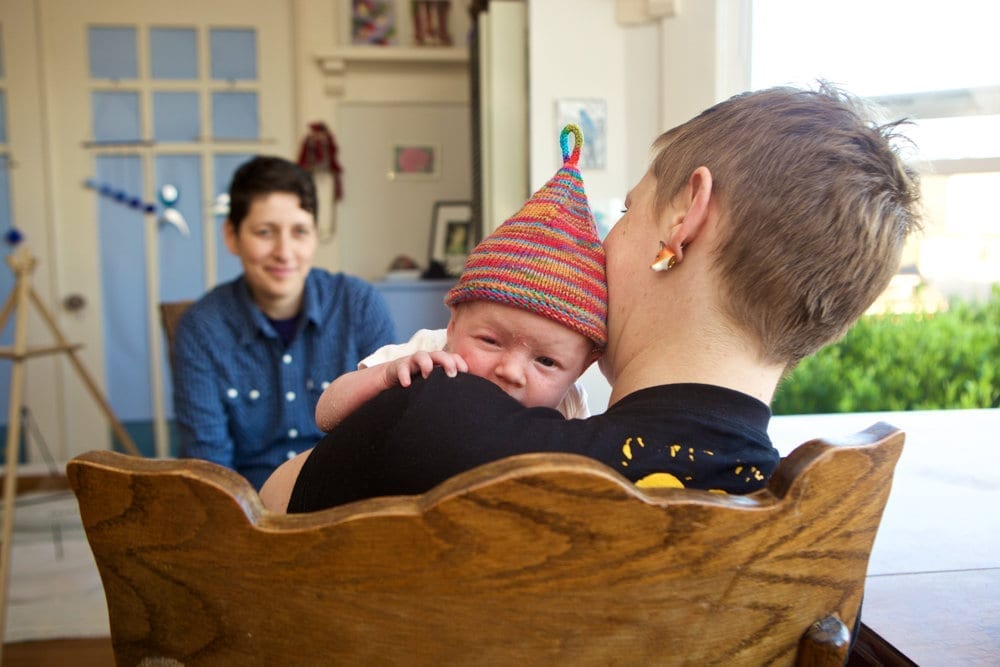 Birthing at the SF Birth Center was an incredible journey. The midwives were always encouraging, confident, and knowledgeable and they helped us feel empowered as parents to make decisions that felt best for our family. Our group prenatal sessions were awesome because we were both able to commiserate with other pregnant partners and get tips about how to deal with the various things that were coming up for us.  The biggest gift, however, have been the new parent meetings following Luna’s birth. Being in a community of like-minded parents and feeling guided by the wisdom of the midwives has made the transition into parenthood so much smoother. We have an immediate network of support that we can turn to for advice, venting, laughter, and friendship. Thank you SFBC for doing such fierce work in this world!!